The Problem With VPN Service Providers

VPN services need no explicit introduction. An average internet user would most likely have used services of a VPN provider at some point or the other to access geo-restricted application, to throw a cloak of anonymity around their online activities, to hide IP addresses from prying eyes of authorities or to simply switch into an ultra-safe browsing mode. Not surprisingly, over the past decade or so, there has been a huge growth in the number of VPN service providers with quite a few popping up every month. However, amid all this hype and intense competition, most of these services are littered with cons related to costs, availability, connectivity and most importantly, the levels of trust one can have in them. In the world of VPNs, trust is of paramount importance since the weakest link in a VPN-based anonymity chain is the log data stored by a VPN service provider. Having spent most of my career as an application developer/architect, I know software engineers will almost never write an application that produces no logs at all. Application logs are to software what black boxes are to an aircraft, which make them almost indispensable in a software development lifecycle. Essentially, this means all online activity that you pipe through a VPN application will almost certainly be recorded somewhere, even if the logs are intended to be used just for debugging purposes. Every VPN service provider out there will go all out to boast about their zero-logs policy much before they have made even made the basic functionality of their applications clear but I for one, would take all that with a pinch of salt. Under reasonable pressure from empowered authorities, I am sure a business-minded VPN provider will quickly buckle to give away those logs, breaching your trust and defeating the entire purpose of a VPN connection.

Whilst you can't gate-crash into a VPN provider's premises to delete their logs, you definitely can address the problem by hosting your very own VPN server. To some, this may seem like killing a fly with a sledgehammer and outrightly far fetched to some others, but it turns out building and hosting a personal VPN server is not complicated at all. A custom VPN server, living inside a cloud-based container, places you in complete control of the client and server side of things, making you the absolute master of any logs that you may choose to write in your VPN server. With elastic compute engines of the kind made available by any cloud provider, not only do you control who can have access to your VPN logs, you can even choose to delete your entire VPN container if need be, leaving no traces behind. And all of that, in a matter of seconds.

Before we jump into building a VPN server, lets take a brief look at the software options we have. OpenVPN is by far the most popular opensource VPN software out there. It has been around for about a couple of decades now, has very wide adoption and is well supported by an active community of developers. Wireguard, another open source VPN technology, on the other hand is relatively modern, with a promise of massive speed, efficiency and security improvements over OpenVPN. Reasonably lightweight, wireguard is way leaner, more efficient and comes with an out-of-the-box offer of much higher speeds and enhanced security. The wireguard application has been written with just 4,000 lines of code compared to OpenVPN that runs into over 40,000. More and more VPN service providers are leaning towards wireguard, so much so, that within the next few years wireguard is all set to emerge as the prime VPN technology.

While it is very much possible to host a personal VPN server using OpenVPN, in light of the above considerations, I decided to base my prototype on wireguard. It pays to be futuristic, I guess.

For the purpose of this write up and to ensure I don’t hopelessly meander out of context, I have made the following assumptions:

1. The reader is familiar with basic concepts of AWS, particularly EC2.

2. The reader is familiar with how a VPN works, how it hides your public facing IP address and how it encrypts data in transit.

3. The reader is aware of basic networking concepts like port forwarding, IP tables etc has also has basic knowledge of key-pair based encryption.

4. The VPN client is a Linux box running Ubuntu 20.04. However, nothing prevents the reader from copying the wireguard client-side configuration and using it to configure a wireguard client on a Windows laptop or a Mac-based system. For that matter, even a home or company router can be configured on similar lines to hook up as a client to the VPN server we are creating here. When a router at the edge of a LAN becomes a wireguard client, all outbound traffic from the LAN is tunneled through the VPN server.

The following diagram shows an overview of this idea from a networking point of view: 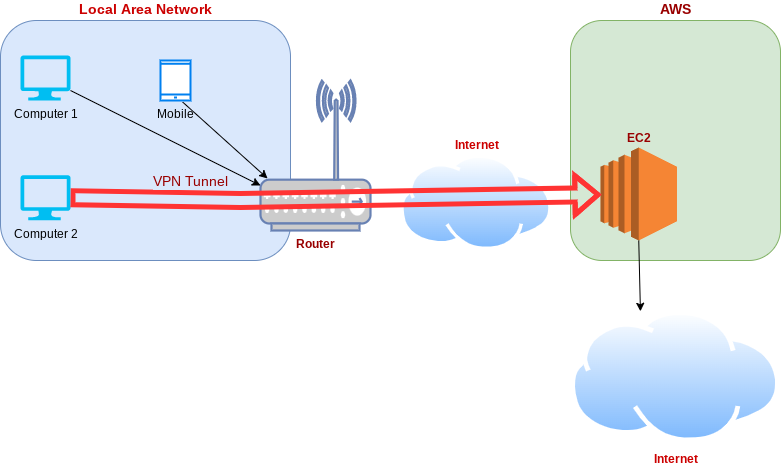 Login in to your AWS account and provision a t2.micro / Ubuntu 20.04 EC2 instance for yourself. Allocate a static (Elastic) public IP address in AWS and associate it with your EC2 instance. SSH into the EC2 instance and on the command line run the following commands:

The server_publickey generated above will be used in the client configuration (see below in the client configuration section) To ensure the wireguard tunnel allows for internet connectivity and acts as a gateway, it is necessary to ensure network packets received in the tunnel are forwarded to their destinations. To achieve this, create a file /etc/sysctl.d/10-wireguard.conf with the following content:

Port forwarding will now be enabled when the server reboots. To enable it on a running server, execute the following command:

Now enable the wireguard server as a daemon, start it up and view its running status for ensure there are no errors:

In the security group for the EC2 instance add a "Custom UDP" inbound rule to allow incomming traffic on the wireguard "ListenPort" configured above e.g 41194. Also double-check to ensure the EC2 instance has access to the internet (this is usually the default). Your wireguard server is now up, running and ready to serve.

Assuming the wireguard client is a linux box (ubuntu 20.04 was used in my prototype), open a shell prompt and run the following command to install wireguard

Generate the client-side public and private keys as follows:

To test the connection, try pinging your client from your server and vice versa. For the pings, remember to use IP addresses assigned to the server and client from the CIDR ranges we configured above. Another way to test is to look up your public facing IP address (using sites like www.whatsmyip.com) and to ensure that the IP shown is that of the AWS EC2 instance rather than that assigned to your router by your ISP. I used this link to fetch details of my public facing IP in JSON format and here is the output I received which clearly shows my VPN client connected to the internet through a North American IP address, 3.143.50.110. This is also the elastic IP address I associated with my EC2 instance in AWS:

To disconnect from the VPN, run the following command:

This kind of a custom VPN setup only involves charges levied by the cloud provider (like AWS) that hosts the compute engine. In the case of AWS, this may be made up of EC2 charges, storage charges (for the EBS volume attached to the EC2 instance), and data ingress and egress charges. However, my rough calculations based on a t2.micro instance in EC2 throughputting 1 TB of internet traffic anually show that the annual costs are still going to be lesser than the average annual charge levied by an average VPN service provider. Also, readers may consider cloud providers like Oracle that provide two t2.micro type instances as a "forever free" offering in the free tier. VPN servers running wireguard do not consume a lot of resources which convinces me a t2.micro instance or its equivalent should suffice in most cases.

From inside of my EC2 instance setup in the AWS us-east-2 region, I could achieve speeds of about 560 Mbps using the linux command line speedtest-cli tool. With a wireguard client based in London, my max bandwidth was 190 Mbps over a 210 Mbps connection provided by my London-based ISP. It is clear therefore that the bottleneck in my case was my own ISP, with negligible loss of bandwidth on account of VPN tunnelling. This observation is quite in line with speed and efficiency claims made by developers of wireguard. Also, during my speed test, the EC2 instance showed just 14% CPU utilization with ample memory to spare. Therefore, in my opinion, this setup is quite a workable option from a performance point of view as well.

VPN service providers usually offer a range of globally distributed servers to connect through. This may be required if you need to present a particular geo-location to an application that restricts access based on the client's geographical location. The same feature can be built into your custom VPN service by creating an AMI (Amazon Machine Image) of your EC2 instance and spinning up replica instances in other AWS regions of choice. Most users would need no more than two or three such locations and therefore a similar number of EC2 instances, which ties well with cost considerations I have discussed above.

Dipak Jha is is a hands-on Solutions and Integration Architect. He is based at London, UK and works as a SME on Cloud Technologies, Enterprise Architecture, Middleware, Systems Integration, Transformations, Migrations, and general Internet technologies.